As an official charity partner for a second year, we're sending #TeamHFNY runners to the 2022 TCS New York City Marathon! For all our runners, Sunday, November 6 will be their biggest running milestone after a long year of training.

Get to know some of this year's 12 runners below! (More runner profiles coming soon!) 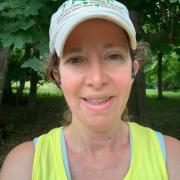 "God has used running in my life to bring healing and a new sense of capability."

As our Team Captain this year, Elena is encouraging our group of 12 participants to train and stay focused! Elena attends Redeemer Downtown and has also served HFNY affiliates such as UES Rehabilitation and Nursing Center, Next Step Community Church (formerly RHOW Brooklyn), The Salvation Army, and volunteered at Don't Walk By.

Elena shares, "God has used running in my life to bring healing and a new sense of capability. I’ve also adored how the whole city joins in the marathon party with all the runners. So it’s my delight to use running to bring health, capability, and some of that party to others through running for Hope for New York." 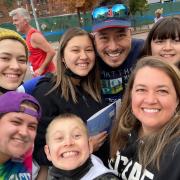 "I run for HFNY because of its impact all over my city."

Matthew, who is a pastor and on staff Redeemer City to City NYC, is returning for his second year as a #TeamHFNY runner and fundraiser! Matthew and his wife also support HFNY affiliates such as A House on Beekman, The Bowery Mission, Do For One, Restore NYC, Safe Families for Children, and World Vision.

Matthew shares, "I run for HFNY because of its impact all over my city. Through their service people are fed, children are educated, the disabled find friendship, the forgotten find hope, and much, much more. It's pure joy to know that my marathon will benefit so many of my neighbors all around NYC." 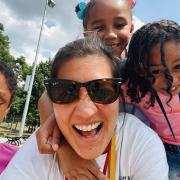 "Running has always been my go-to when I’m feeling overwhelmed or anxious."

Sami shares, "Running has always been my go-to when I’m feeling overwhelmed or anxious. I moved to NYC in December 2020 after two years of living overseas in Malawi, Africa. That was an overwhelming time, and to cope, I found relief in running! My first year and a half in New York has been define by working at A House on Beekman, where I have had the privilege of entering into a world that is not mine, to tutor and teach elementary kids.

"I remember walking into the building and declaring that I wanted to run the marathon some day. So with that in mind, my boss Sloan nearly sprinted to me when she got an email about #TeamHFNY and I jumped right on it. Both AHOB and running have been such a big parts of my life as a New Yorker and also repairing my heart after life overseas." 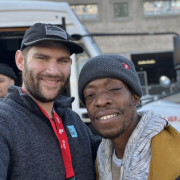 "It is out of an abundance of gratitude that I am running the NYC Marathon and raising support for #TeamHFNY!"

Brett has been faithfully serving hungry and homeless New Yorkers as part of the City Relief team for nearly a decade, as well as pastoring and offering prayer! We're excited he's a part of #TeamHFNY this year!

Brett shares, "It is out of an abundance of gratitude that I am running the NYC Marathon and raising support for #TeamHFNY! As a staff member for nearly nine years with City Relief, a HFNY affiliate, I have tangibly experienced the depth of compassion and tangible resources that HFNY delivers with consistency each and every year. It's AMAZING! It's a deep honor to do this work and I get 26.2 miles to prove it. Double bonus: My dad and I are doing this together!

"Also, this photo is of me and my friend, Jazz, whom I had the honor of baptizing on the streets of Newark during the height of the pandemic!" 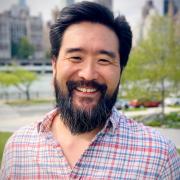 "For all of my life I despised running. But during the pandemic, running was my only option when I needed something that was safe and could help with both my physical and mental health."

We love having more pastoral presence on #TeamHFNY, and you may recognize Abe from past HFNY events and volunteering! Abe served as senior pastor of Redeemer East Side before transitioning into new roles Redeemer City to City and Redeemer East Harlem.

Abe shares, "For all of my life I despised running. But during the pandemic, running was my only option when I needed something that was safe and could help with both my physical and mental health. The thought of running a marathon always felt utterly crazy to me, but I slowly started to feel like it might actually be within reach. Then a friend suggested I run with #TeamHFNY. "Having been a pastor at Redeemer for years, I had been a long-time friend and advocate of HFNY, so it made perfect sense! I love that this crazy personal goal will also raise money to serve the poor and marginalized in NYC—all in the name of Jesus." 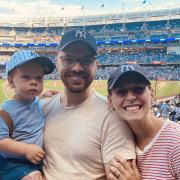 "Running the marathon with HFNY is a dream come true on so many levels."

For the first time this year, we have a couple running with #TeamHFNY! Sheila and Corbin have both served with Safe Families for Children and been a part of His Toy Store through their church, Apostles Uptown.

The couple shares, "For several years I (Sheila) have cheered on friends running the NYC Marathon and have hoped to run it myself one day. I was thrilled when I saw HFNY as a charity sponsor and loved the idea of using the marathon as a platform to spread the word about their amazing work.

"As a cherry on top of it all, my husband (Corbin) signed up for the marathon with me as an anniversary gift, knowing how much I love running with him. Corbin and I have both volunteered with several HFNY affiliates and are excited to continue our support through fundraising. Running the marathon with HFNY is a dream come true on so many levels." 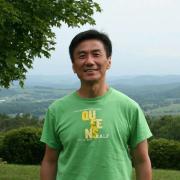 "I am running the NYC marathon with HFNY because I love the kingdom work carried out by this ministry and I love running."

This year, Eric will be running alongside his friend Abe Cho as part of #TeamHFNY! Eric is also deeply invested in HFNY affiliate Open Hands Legal Services and serves on their Board of Directors.

Eric shares, "I am running the NYC marathon with HFNY because I love the kingdom work carried out by this ministry and I love running. It was an easy decision to take this opportunity to combine these two things as a member of #TeamHFNY!" 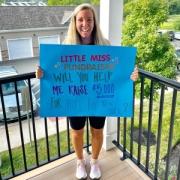 "I ran every mile thinking about the work HFNY is doing throughout the city."

Brooke is a self-proclaimed number one cheerleader of Hope for New York. As an avid supporter, Brooke also ran the Marathon as part of #TeamHFNY in 2021 last year!

Brooke shares, “It was the most meaningful race I have completed. I ran every mile thinking about the work HFNY is doing throughout the city. One of the best moments was when my mentee from a former HFNY affiliate showed up to cheer me on. Hope for New York holds such a special place in my heart as it became a huge reason I loved NYC while I lived there. Volunteering in a variety of aspects helped me to love my neighbors better and learn about how to serve others to best glorify God. Running another marathon for Hope for New York is such an honor.”

While living in NYC, Brooke also served as a Morris Academy mentor, guiding her mentee during college admissions. Brooke was also active in Don’t Walk By, Community Grants Circle, and the Young Supporters Community. She even helped launch HFNY initiatives with Redeemer Lincoln Square. 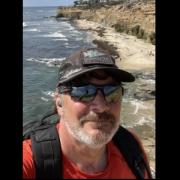 "I just reached the milestone age of 60 years, and I am extremely blessed to still be running.

Mark is running this year’s Marathon alongside his son, Brett Hartford, who has been on the City Relief team for almost a decade.

Mark shares, “I just reached the milestone age of 60 years, and I am extremely blessed to still be running. I have only been a part of endurance events where I ran for 20+ miles while carrying 55 lbs in a backpack.

“Through my son, I became aware of the amazing work of HFNY and the great contribution they make to many organizations throughout the NYC area. I count it an honor to be even a small part of that great work. My brief time serving with City Relief has stretched my level of compassion and understanding for our friends on the streets. I walk away every time feeling as though I have received way more than I have given.” 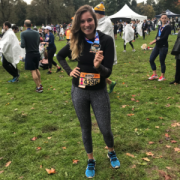 "Let us run with endurance the race that is set before us."

Justine was one of our original #TeamHFNY runners before the Marathon was postponed from 2020 to 2021. She has also been involved as a leader in our Young Supporters Community.

This year, Justine is running for #TeamHFNY for the first time and is looking to Hebrews 12:1 ("Let us run with endurance the race that is set before us.") as motivation!