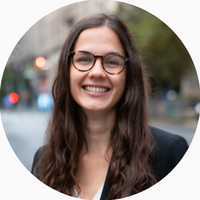 Abby just joined our team as our new Executive Assistant!

NYC is near and dear to Abby's heart because she spent her youth growing up here, and she recently moved back to the Big Apple.

In her new role, Abby will be working closely with Elise, our CEO, and the Mobilization Team. Read about the neighbors in need that Abby has a heart for, plus her recommendations for mercy and justice books and movies.

What do you love most about New York City? Any favorite places or neighborhoods?

My favorite thing about NYC is definitely the diversity. There are so many kinds of people from different walks of life, and we all live in close proximity to one another compared to other places. I also love that there is every type of food you can imagine! It’s hard to narrow down my favorite neighborhoods since there are so many unique parts of the city, but the Upper West Side will always have a special place in my heart. I lived there during my pre-teen/early teen years, and I still feel at home there, especially at Riverside Park and Absolute Bagel (which my family frequented before it was popular!).

Describe a time when volunteering changed your faith outlook and your desire to support neighbors in need. Is there a community connected to your heart?

There have been several moments volunteering in which the Lord especially stirred my heart to care for those in need. I am particularly passionate about supporting and advocating for refugees resettled in the United States. As individuals who have lost everything, they are desperate to cling to a stable hope. Even the smallest victories feel empowering and freeing, such as a man learning to recite the English alphabet, a woman getting to pick out shoes at the store for herself, or when a ninth grade finally understands a math equation like 2+2. In light of these experiences, genuine cross-cultural relationships and belonging can be uniquely transformative in the lives of refugees. As a follower of Christ, I am called to seek out, welcome, serve, and love the sojourner.

Are there any books or movies you would recommend that impacted your outlook on mercy and justice?